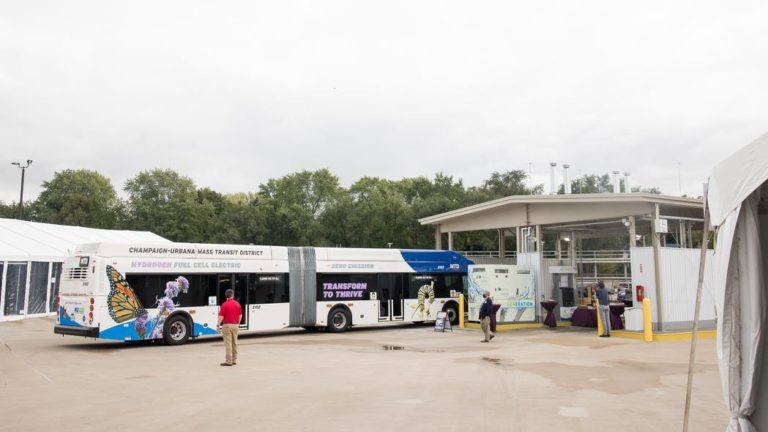 Champaign-Urbana MTD leveraged private and public partnerships to be the first transit agency in the United States with a hydrogen fleet fueled entirely from its own 100 percent renewable source.

By working with a consortium of partners, including state, federal, local, private, and nonprofit entities, the Champaign-Urbana Mass Transit District (MTD) made history this past year when it introduced its new zero-emission fleet technology, including a 100 percent renewable hydrogen production station, as well as the nation’s first commercial deployment of 60-foot articulated hydrogen fuel cell electric buses.

Private and public partnerships were the backbone in bringing this vision to reality, supporting MTD’s efforts to deliver high quality traditional and innovative transportation services that are safe, reliable, environmentally responsible, and user friendly.

The project dates to 2017 when the MTD submitted a successful application to the Federal Transit Administration (FTA) for the Low- or No-Emissions program, which resulted in a $1.45-million grant. The agency also secured other state and federal funding to cover 94 percent of the project through grants that support clean, zero-emission, and sustainable initiatives. MTD partnered with the Center for Transportation and the Environment (CTE) to plan the project and coordinate the various aspects.

For this technology to be truly zero emissions, MTD secured private sector partners to develop an array of solar panels to produce clean energy, which then powers the hydrogen production station by using solar power to turn water and electricity into hydrogen that is then used to fuel the buses. And finally, when the buses are in service, the only thing they will emit is water vapor.

“This isn’t quite Star Trek level technology, but it’s on the path. It’s significant and it’s real,” MTD General Manager Karl Gnadt told the crowd of project partners, stakeholders, as well as local, state, and federal officials at a press event to demonstrate the new technology.

MTD’s two zero-emission, hydrogen fuel cell-electric, 60-foot Xcelsior CHARGE H2™ heavy-duty transit buses from New Flyer of America (New Flyer) were first unveiled at MTD’s maintenance and storage facility in Urbana, Ill., on Oct. 14, 2021. The event not only celebrated industry firsts but also the sheer number of collaborators, including the FTA, it took to see this project through.

“The new buses, which will run on hydrogen and produce no emissions, represent the kind of innovation we’re proud to support at the [U.S.] Department of Transportation,” said FTA Administrator Nuria Fernandez during the event.

The agency elected to pursue hydrogen fuel cell in lieu of battery-electric technology because hydrogen eliminates the agency’s fossil fuel consumption while having minimal impact on operations. This is because hydrogen fueling takes about 10-15 minutes, on par with a conventional diesel bus, so MTD doesn’t have to change the way it operates. And, these buses can drive up to 300 miles on a single refueling, allowing MTD to keep a bus in service all day instead of scheduling down time for charging with battery-electric buses.

In addition, more than 15,000 gallons of diesel fuel per bus will be saved each year, with one hydrogen fuel cell bus reducing greenhouse gases up to 135 tons annually. During low winter temperatures, fuel cell vehicles use waste heat from the fuel cell to keep the inside of the vehicle warm, saving significant energy.

New Flyer has been another partner to MTD, helping the agency’s maintenance personnel learn how to use and troubleshoot the new technology.

Berbaum explains New Flyer technicians have been onsite since MTD received the buses and will continue to be onsite, working side by side with the agency to address any fault codes, trialability issues or whatever else may come up.

“We’ve also been really good at relationship building with not only New Flyer, but Ballard, which is the maker of the fuel cell. So, we’ve got engineers that we call them on their mobile phone when we have an issue and they can walk us through remotely. So, we’ve got a lot of good relationships,” Berbaum added.

In addition to learning new maintenance protocols, MTD contracted with Fiedler Group and Natural Gas Fueling Solutions/Cissell Mueller to make modifications to the storage facility to ensure a safe storage and maintenance of the vehicles.

“We’ve put a hydrogen leak detection system throughout this entire storage facility. And there’s a screen that’s in our break room where almost all of us staff reside. And so, if there’s ever an issue, a hydrogen leak or anything gets detected, it will basically sound off alarms so that we know there’s an issue, we need to evacuate the people or evacuate the buses out,” Berbaum said.

Despite the changes, Gnadt adds staff have embraced the new technology, noting the team has been “excited, interested and accepting of the project.”

The partnerships don’t stop there. In order to construct MTD’s 100 percent renewable hydrogen production station, the agency had to plan meticulously while relying on the private sector to innovate and take risks, notes Paul Skoutelas, president of the American Public Transportation Association.

“No one has the expertise and the resources to do it alone,” Skoutelas said during the October event.

Some of the companies that pooled their resources for the project include Trillium Transportation Fuels, which designed, built, and will operate and maintain the fueling station; Hembree Contracting completed much of the construction work of the station; PDC Machines and IVYS Energy Solutions supplied the compression and dispensing equipment as part of the station; Nel Hydrogen supplied the electrolyzer; and Ballard provided the fuel cell in the bus.

“I think that we’re all experts in our own way, but this [was] a complicated project with a lot of nuance. And I think bringing together all of these experts on this project is what has made this to really be, I think, a landmark project,” Ryan Erickson, Vice President of Trillium, said.

To power the hydrogen production, MTD leased an unused plot of land from the Urbana and Champaign Sanitary District that sits across the street from MTD’s maintenance facility to install an array of solar panels—5,500 panels to be exact. This is under construction and is expected to be complete by 2022.

In order to calculate how much power would be needed, a software program from the National Renewable Energy Laboratory will analyze information taken from the solar panels with historical weather data to help MTD determine how much power should be produced.

The solar energy produced is then stored on the utility grid, allowing MTD to sell back any unused clean energy to the community or pull it back off the grid when needed. What’s more is that sustainability is applied through whole lifecycle of the solar panels, called cradle to cradle. This allows the manufacturer to strip out useful materials and turn them into new products.

The solar energy produced is fed directly to MTD’s hydrogen production station. If excess solar energy is produced it is stored on the utility grid, allowing clean energy to be used in other areas of the community. What’s more is that sustainability is applied through whole lifecycle of the solar panels, called cradle to cradle. This allows the manufacturer to strip out useful materials and turn them into new products.

“This is so there’s enough energy in a small amount of volume allowing the bus to have the same range or longer than a diesel bus. There’s no compromises. You only have to fill it once per day and hydrogen gets you throughout the entire day,” explained Afzal.

After the hydrogen is compressed, it’s stored in high pressure tubes until a bus needs to be refueled. Hydrogen can be stored in these tubes as long as needed without losing any energy. In order to dispense the hydrogen into the bus, a nozzle is placed onto the bus receptacle, a lever is turned, a button is pushed and fueling begins.

“When you connect that nozzle to the bus, it’s just high-pressure hydrogen flowing to a low-pressure tank,” Afzal said.

Once fueled, the buses run on MTD’s highest capacity routes, which typically serve the University of Illinois at Urbana-Champaign campus, as well as the surrounding community.

The clean hydrogen produced is expected to power 12 to 15 hydrogen fuel cell buses, and MTD anticipates adding 10 more hydrogen fuel-cell buses to its fleet in the next three years.

“The community has been very excited about the launch of this technology. We have a very science- and tech-oriented focus in our university town [and] I think that has led to a very easy adoption for us. The aspect of truly being green by powering the electrolysis with solar power is what has really tendered the excitement,” concluded Gnadt.

For now, MTD’s zero-emission fleet operates alongside diesel-electric hybrid buses, which currently make up 97 percent of the 118-bus fleet. In 2022, the agency’s entire fleet will be low- or no-emission vehicles.